(Portland, Ore.) – The job description for Portland, Oregon’s next mayor is clearly economic development, at least that’s where the current two mayoral candidates, Charlie Hales and Jefferson Smith, agree. The candidates also agree in prioritizing access to capital and incentives to grow investments in the sector. However, they differ in how to make that happen.

“Both candidates acknowledge that they want to keep the life science and biotech industry growing here in Portland,” says Oregon Bioscience Association’s Executive Director Dennis McNannay. McNannay refers to the 2012 Battelle/BIO national industry report, released in May, 2012, showing how Oregon has outpaced most states, including Massachusetts, Texas and California in relative job growth for the past decade. 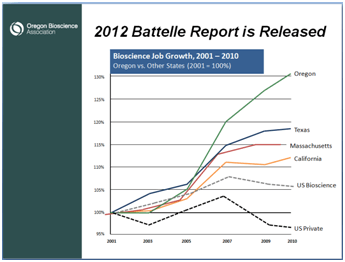 Candidate Jefferson Smith notes that in the past 10 years, small and locally-owned businesses with between 1 and 100 employees have created more than 165,000 jobs in Oregon. He said, “Rather than just hunting for new companies to come to Portland, my economic development plan calls for using our resources to spur the growth of local businesses with 1 to 100 employees. With CEO mentoring, market research, and aid in accessing capital, we can double down on OTRADI investments to move our economy ahead, bring more venture capital into our state and provide our young people with high-paying, stable jobs of the future. The growth of the biosciences industry is critical to our future economic success.”

“I am eager to find ways to work with all of our existing and emerging industries to create and increase jobs in Portland. I believe we can promote and grow the bioscience industry through these three things,” Hales said.

Hales also notes, “Bioscience does more than merely contribute to our society; we have a history of creating job growth and living wage bioscience jobs in Oregon.” He cited economic impact studies from 2007 and 2009, showing the industry provides tens of thousands of jobs at an average salary exceeding $50,000.

Earlier this year, Hales announced a plan to increase access to capital for local small businesses through a program called Community Credit Portland. Said Hales, “Community Credit Portland is a proposal for a loan guarantee program funded by the City of Portland. By harnessing the existing revenues of the City – about $2.14 billion – and by working with local banks and credit unions to create greater access to capital for qualifying businesses, the city can invest in the creativity and talents of our companies, spurring our local industries forward.”

Another opportunity that Hales sees is to support B-Corporations by charging them half of the city’s business license tax. He wrote in a statement to Oregon Bio, “As Mayor, I will also urge the county to halve its business income tax for these progressive firms, since they save the public sector money by being socially responsible. This standard should be attainable for many bioscience companies.”

Candidate Smith however, sees the benefit of placing a greater emphasis on early-stage businesses and “finding them tools and capital to help them grow are critical to our economic success.” He adds that he envisions “a much more coordinated effort to train our workforce and would take a lead role in pulling together groups like yours along with our universities, our community colleges, our nonprofit organizations and our elected officials from all levels to work on training our young people and retraining older workers who are challenged in today’s economic climate.

Smith also noted he has a very personal reason for supporting the work of the bioscience industry in Oregon. “Through the work of Dr. Brian Druker, my father-in-law is alive today because he took Gleevec,” said Smith. He adds that his family knows well “the benefits of Oregon’s biosciences industry.” Gleevec was discovered at OHSU a decade ago, as a treatment for chronic myeloid leukemia.