The release of the fourth economic impact study documents continued growth in employment, wages and overall economic activity that ripple through every sector of Oregon. The report’s Executive Summary can be downloaded at https://www.oregonbio.org/bio-in-oregon/resources/. 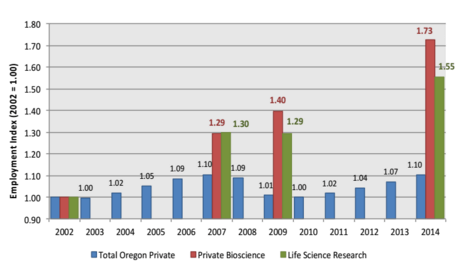 Between 2002 and 2014, employment in bioscience increased by 68 percent (an addition of 6,000 jobs), compared to a 10 percent increase in all private sector employment in Oregon. In addition, average annual wages (nominal) increased by 56 percent over the same time period, compared to a 39 percent increase statewide. Also of note, the report found that almost half of the Oregon’s bioscience firms were located outside Portland. And, the industry is getting more diverse. The report details that bioscience in Oregon employed 8,340 women (47 percent of bioscience employment) and 3,900 minority workers (22 percent of bioscience employment).

“We were pleased by the data detailing the growth and impact of this sector, these indicators reflect that bioscience in Oregon is an innovation engine,” said Oregon Bioscience Association’s Executive Director Denise McCarty. McCarty points to the employment multiplier of 2.6. This means that every ten bioscience jobs support another 16 jobs in other sectors of the Oregon economy.

“As we know from previous reports, Oregon’s bioscience industry not only weathered the last recession, but actually increased employment and payrolls. This report now shows that growth in the bioscience industry has continued, making the industry a large employer with high-paying jobs. Perhaps even more importantly, wage and employment growth is evident in all bioscience sectors, helping to insulate the Oregon economy from downturns in a particular sector,” said Alec Josephson, economist with Pinnacle Economics.

Josephson also said, “The bioscience industry benefits the Oregon economy in other ways, too. It generates high-paying jobs for thousands of women and minorities, exports much of its production and brings outside dollars that support local economic activity, and has strong-
supply chain relationships with Oregon companies.”

Josephson is the author of the association’s fourth economic impact report, which quantifies the full range of economic and fiscal impacts associated with the bioscience industry in Oregon. The report, Economic Impact Study: Profiling the Growth of Oregon’s Bioscience Industry, 2014, is being highlighted today in the release of the executive summary, and examines the key findings of the growing sector in Oregon. The new report includes the direct dimensions of the industry, as well as the multiplier spending effects associated with supply-chain and consumption-driven spending. This year’s report examines the most recent data, from 2014, and also includes export measurements.

Added McCarty, “Oregon’s employment numbers track national data as culled by BIO, which in its most recent report, using 2012 data, showed Oregon’s bioscience sector outperformed in employment growth compared to other major biotech and life science markets in the U.S., including Massachusetts, Texas and California.” She points to the BIO/Battelle Institute study (http://www.bio.org/sites/default/files/SP_Oregon.pdf). Both report showed Oregon’s bioscience job growth outpaced average employment gains by nearly 50 percent, as compared to other states, in the years between 2001 and 2010.

Oregon’s report used government data and national benchmarks such as NAICS codes, which are directly comparable to the most recent national report of the Biotechnology Innovation Organization/Battelle Institute, which examines both the national economic impact landscape as well as a state-by-state comparison. It can be found at – https://www.bio.org/articles/battellebio-state-bioscience-jobs-investments-and-innovation-2014.