Oregon is known more for its prowess in pinot noir than biosciences.

But bio’s economic footprint is about twice that of the wine industry, at $10.7 billion in 2017, according to a new study by Pinnacle Economics done for the Oregon Bioscience Association. Private bioscience concerns and public research institutions and hospitals directly generated $6.5 billion in economic input and 19,157 jobs that year, Pinnacle found.

The snapshot reveals an industry that’s slowly coming into its own but has yet to reach true critical mass.

Employment in the sector sort of resembles a barbell. Of 820 companies, 400 have headcounts of just one to four employees. Those early-stage startups have kept the OTRADI Bioscience Incubator full with a waiting list. There are 26 on the roster currently, up from six when the incubator started 11 years ago. 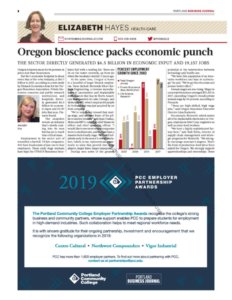 At the same time, Oregon is home to a handful of larger biotech employers. These include Biotronik-Micro Systems Engineering, a German manufacturer of pacemakers and implantable defibrillators that has its North American headquarters in Lake Oswego, and MolecularMD, which employs 85 people in Portland and was just acquired by an Irish company.

“We’re very heavy toward that startup stage, and we have fewer of the pillar or anchor tenants,” said Ryan Dunlap, MolecularMD’s outgoing chief financial officer and chief operating officer. “I would like to see more of our companies move to medium size, and not just have a massive bed of early stage. We’re still relatively early in the sector’s overall evolution, which, to me, represents an opportunity to seize that growth into large players, larger hires, larger taxpayers.”

Dunlap sees some of the greatest potential at the intersection between technology and health care.

“We think for Portland and Oregon, that’s one of the sweet spots,” he said. “We have this population of an innovative workforce and base in technology. We’ve got the chocolate and peanut butter effect.”

Not only has employment in the sector increased, so has pay. Annual wages in corporate bioscience averaged $70,451 in 2017, exceeding Oregon’s overall private annual wage by 40 percent, according to Pinnacle.

For example, Biotronik, which makes all of its implantable electronics in Oregon, employs ex-Intel Corp. engineers as well as entry-level workers.

“We have a highly sophisticated factory here,” said Matt Smits, director of supply chain management and strategic programs. “We strongly encourage associate’s degrees. That’s the kind of production-level labor force suited for Oregon. We strongly support apprenticeships and internships. These are well-paying jobs. There’s no such thing as minimum wage.”

OTRADI Executive Director Jennifer Fox attributes the sector’s growth to two critical factors. Oregon Health & Science University continues to spin off more companies from research labs. And the state has given $14 million in support to the incubator since its founding, she said.

“They’re underwriting a lot of the faith in this industry for creating a home to succeed,” Fox said. “They’ve helped create a place that’s agnostic and open to everyone. You’re going to see more small companies moving here to take advantage of those resources.”

Housing so many in one place has also helped. Anil Kumar, an OTRADI tenant said he’s benefited from the close proximity to other startups and easy access to industry veterans who take his calls and have sat down with him over coffee.

“The list of biomentors is really powerful,” said Kumar, who is developing a diagnostics testing platform.

While many OTRADI tenants have struggled to find space outside the incubator to accommodate the next stage of their growth, that conundrum may soon be solved. Summit Development Group is at work on two laboratory-office projects on the Central Eastside that will add nearly 400,000 square feet to the inventory and allow the constellation of OTRADI startups room to expand.

“Satellite offices for VC companies would be nice to see,” said Dennis McNannay, CEO and co-founder of Curadite, a Beaverton startup making intelligent packaging for prescription drugs, including opioids. “That’s what I’d like to see more of, even more than the volume of dollars invested.”