The Oregon Bioscience Association recently released a new economic impact report, showing that the state’s biopharma and life science industry is continuing to grow at a significant clip. This is consistent with what is currently known about the American Northwest, which is also the BioSpace Bio Forest Hotbed. For example, a recent report by the U.S. Bureau of Labor Statistics and CBRE Research identified Seattle as the fastest-growing life science market in the top 10 from 2014 to 2017, with a greater than 17% growth. 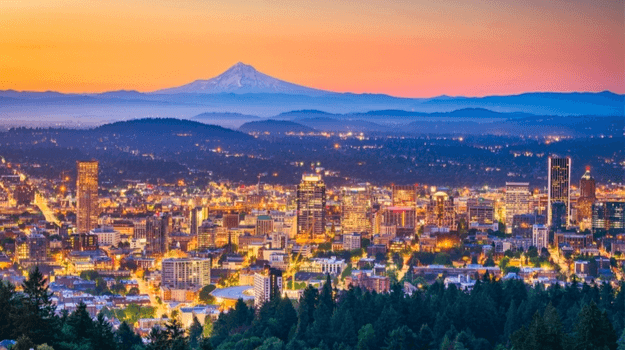 The report, titled, “Economic Impact Study 2019: Profiling the Growth of Oregon’s Bioscience Industry in 2017 (and Trends Since 2002),” found that in 2017 the bioscience industry and its impact on supply chain and consumer activities had a $10.7 billion output, including $3.4 billion in income and 47,238 jobs, generated $401.9 million in tax and fee revenues for state and local jurisdictions, and $789.6 million in tax and fee revenues for the federal government.

“It is compelling to note that Oregon’s biotech and health research sectors reside in all sizes of companies from start-up to scale-up to medium-sized to very large,” stated Liisa Bozinovic, the association’s executive director. “And the increased diversity shows larger numbers of women and minorities work in our sector.”

The breakdown for the state was 820 corporate/firms/organizations generating $1 billion in wages and $415 million in benefits and payroll taxes, $669 million in economic activity in life science research labs, hospitals and universities, responsible for $422 million in wages, and NIH and federal dollar awards to Oregon research, which in 2017 hit $363.4 million.

Michael Heinrich, Professor of Medicine at Oregon Health & Science University, presented data at the American Society of Clinical Oncology (ASCO) 2019 Annual Meeting on behalf of Cambridge, Mass.-based Blueprint Medicines Corporation. Heinrich was an investigator on the NAVIGATOR clinical trial that evaluated evapritinib in patients with PDGFRA Exon 18 mutant gastrointestinal stromal tumors (GIST) and fourth-line GIST. The data will be used to build global marketing applications for the drug.

On May 31, Aeroflow Healthcare, based in Asheville, NC, entered a partnership deal with PacificSource of Oregon and BCBS CareFirst. Aeroflow will provide PacificSource patients in Oregon, Idaho and Montana, as well as CareFirst patients in Washington, DC, Virginia and Maryland, with advanced medical equipment at little or no cost via insurance. These products include breast pumps, incontinence supplies, pediatric nebulizers, and CPAP devices.

Summit Development Group, of Portland and Vancouver, Oregon, in April acquired a majority of a southeast Portland block in the Portland IQ and plans to build two, connected 10-story buildings. This is part of the announced “New Industrial Revolution” (NIR) campus that was announced in 2018. The NIR complex will have 347,000-gross-square-feet and will house early- and mid-stage bioscience and technology companies.

The NIR center, specifically two adjacent buildings, are being customized specifically for the needs of emerging and growing life science companies.

“We are creating a very innovative building using cross-laminated timber supported by steel core,” stated Eric Saunders, Summit’s president and chief operating officer. “The common courtyard will create a unique neighborhood attraction, featuring several small local restaurants, coffee shops and service companies that will support the building’s tenants. There continues to be strong demand for this kind of customizable, entrepreneurial and cost-conscious space. We’re excited about this project because the advanced level of structural and mechanical systems will be unique and a great asset to the Central Eastside. We have started pre-leasing and look forward to working with innovators in this space.”

On March 7, Eugene, Ore.-based NemaMetrix, raised an additional $5 million. Oregon Venture Fund was the lead investor and Rogue Venture Partners also participated. This brings the company’s total private investment to $8.5 million. NemaMetrix has developed DNA testing equipment using nematode worms. “This acceleration will allow us to drive time down to 10 days, and that puts it in a time frame that allows it to be usable to give a clinician information to make a decision to treat an individual patient,” stated Matt Beaudet, the company’s chief executive officer.

In April, the Oregon Bioscience Incubator (OBI) announced that one of their companies, Aronora, had finished a first-in-human clinical trial of their FXI inhibitor. Also in April, XOMA Corporation, based in Emeryville, Calif., acquired the rights to potential royalties and a potential milestone payments associated with five of Aronora’s hematology assets. Three of the assets are anti-thrombotic candidates that are covered by a collaboration with Bayer. Two of the compounds are early to mid-stage compounds, with the third a Phase II candidate that is subject to an option. Under the terms of the deal, XOMA made an initial $6 million payment, and will make an additional payment of up to $3 million to Aronora upon hitting certain conditions. XOMA will receive, on average, low single-digit royalties on future sales of the five products and 10% of the milestones associated with each of the assets.

Alec Josephson of Pinnacle Economics, who conducted the study for the Oregon Bioscience Association, notes, “The bio sector here is thriving and continues to outshine the state averages with higher wages, more jobs, a growing number of bio companies/firms and more funding from federal sources for research than previous studies. It will be important to protect and preserve this growth so our expanding industry can continue to support Oregon’s diverse economy.”