By Fedor Zarkhin | The Oregonian/OregonLive

Researchers at the Providence Cancer Institute have swiftly switched gears from cancer and thrown themselves into finding a vaccine for the novel coronavirus, hoping to redirect a technique used for battling cancer. Their work would combine a protein that fires up the immune system with a standard type of virus vaccine to hypothetically teach the body what to attack and then unleash a strong enough assault to neutralize the novel coronavirus before it can make a person sick.

They’re going full steam ahead, despite the many unknowns that could derail the project and cost valuable time and money.

About two weeks after first cooking up the idea while on the phone with a California biotechnology company, Dr. Bernard Fox and his colleague, Dr. Rom Leidner, have asked the federal government to approve their proposal for a vaccine – one of many that researchers around the world are frantically trying to create.

The men said they aren’t waiting around for the U.S. Food and Drug Administration to give them the green light. They’re already manufacturing the vaccine so it can be ready for clinical tests when the federal government approves the project, which Fox said is funded by the Harder Family Chair in Cancer Research endowment and other philanthropic organizations.

“Because of the extraordinary circumstances, we need to move in parallel and accept a greater degree of risk for the sake of being able to test this in people as quickly as possible,” said Leidner, co-medical director of the Providence Head and Neck Cancer Program in Portland.

Getting to human trials is just one of many steps before the vaccine could be ready for regular people. 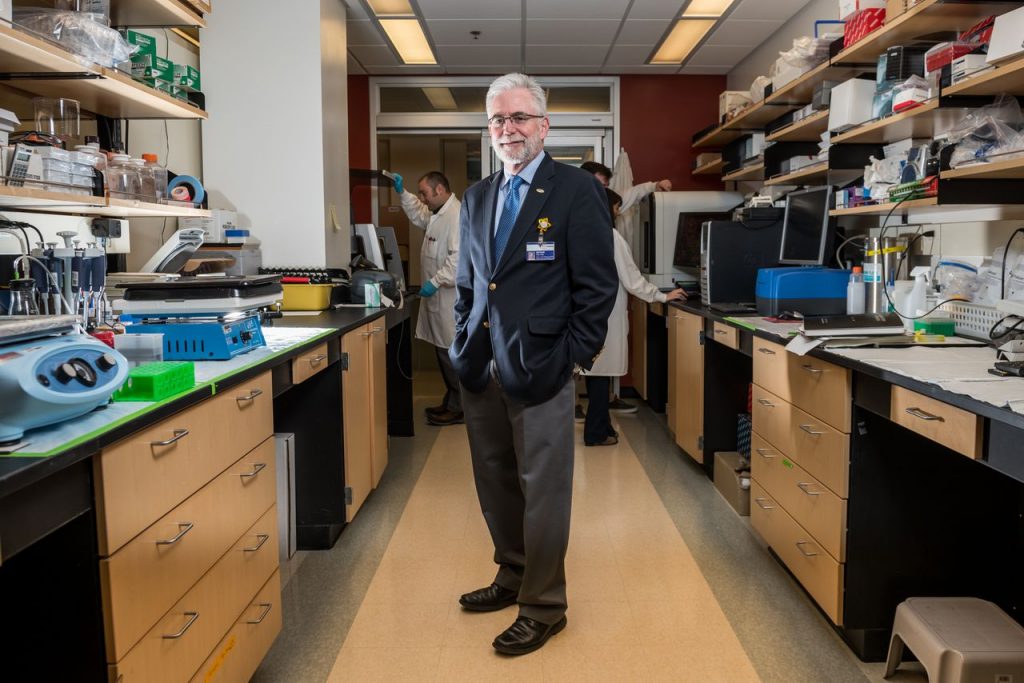 On a normal schedule, it can take about 18 months to get from approval for an idea to a vaccine ready for general use, said Fox, head of Providence’s Laboratory of Molecular and Tumor Immunology.

Based on how the pandemic has played out in some other countries, the brunt of the disease’s impact on society could fade by then. On the other hand, the coronavirus could become a seasonal scourge, much like the flu.

If the federal government accelerates the research given the incredible need, it could be ready in about a year.

Finding a vaccine, said Dr. Anthony Fauci, director of the National Institute of Allergy and Infectious Diseases, is an “urgent public health priority.”While the disease appears to have subsided in China, for now, it has struck the United States in the last few weeks with a substantial force. The U.S. now has the most coronavirus cases of any country, with more than 160,000 people diagnosed with an infection, according to a New York Times database. Those are known cases. Given the strict criteria for who can get tested, the real number is likely much higher.

That’s why the Providence researchers are far from alone in their quest to quash the virus. The first tests in the world of an experimental coronavirus vaccine on people began two weeks ago, by a Cambridge, Mass.-based biotechnology company in partnership with, among others, the Kaiser Permanente Washington Health Research Institute in Seattle.

A China-based biotech company also recently started human trials and numerous others have been developing vaccines of their own, including Pfizer, the German company CureVac and others.

While there are a lot of contenders for the first coronavirus vaccine, Leidner and Fox said that, as far as they know, their approach is unique.

The first part of Leidner and Fox’s vaccine works just like the many standard vaccines that have been used effectively for decades: It will teach the body to recognize a virus based on an innocuous snippet of the virus injected into the body.

In the case of the coronavirus, the researchers’ vaccine will include the characteristic spikes on its surface. That’s the part that binds to human cells before the virus makes its way inside and hijacks the DNA.

Once the immune system knows what the coronavirus looks like, it can produce antibodies — specialized proteins that find the invader, then bind to it and neutralize it.

The second portion of the vaccine is a concentrated dose of DNA strands, called a plasmid, that finds its way into cells. There, the strands serve as templates that the cell can use to manufacture a special protein that the body already creates naturally but only in small quantities and when a person is already sick.

Once cells produce that protein, it triggers a response from at least two kinds of immune system cells, one of which destroys infected cells directly, while the other helps make antibodies.

The theory is that exposing the body to both parts of the vaccine – the chunk of virus as well as the protein templates – will result in an intense immune system response if the coronavirus tries to infect a person.

That type of combination has been tried twice before, Fox said, with HIV, the virus that causes AIDS, and with Ebola. But he said he doesn’t know of any researchers who are using the method to develop a coronavirus vaccine.

Leidner and Fox have already seen the protein shrink tumors in cancer patients, and they believe it could be similarly effective against the coronavirus.

But multiple hoops remain before the theory can become reality.

Along the way, the men said, they will take note of what the research shows and adapt the precise formula of the vaccine, as necessary.

“It never works exactly the way you think it’s going to work,” Fox said. “But if you study it,” he said, “you can learn a lot.”